The event that took place in Rabat on the 23 and 24 March 2018 inaugurated the bauhaus imaginista series of exhibitions and discursive programmes. Departing from a 1927 drawing of an oriental carpet by Paul Klee, the events focussed on the transcultural readings of modernist art practice and the re-mapping of avant-gardes’ territories. END_OF_DOCUMENT_TOKEN_TO_BE_REPLACED 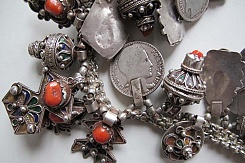 Looking into the history of objects, into their original practical and social function as well as into the circumstances of their transition to European and other countries of Western civilization, the artist Kader Attia aims at conveying the full identity of the objects and to follow the traces of their disappearance that still can be discovered today and call for repair. END_OF_DOCUMENT_TOKEN_TO_BE_REPLACED 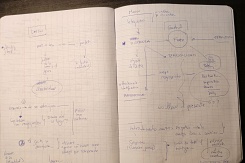 On 24 and 25 March 2018, we met in Rabat to participate in the first event of the bauhaus imaginista project. We were attending a workshop with the French-Algerian artist Kader Attia, surrounded by an exhibition of archival materials from artists and students from the École des Beaux Arts in Casablanca and including the Maghreb Art magazine on the walls of Le Cube — independent art space that hosted Attia’s show in Rabat. END_OF_DOCUMENT_TOKEN_TO_BE_REPLACED

The symposium of bauhaus imaginista: Learning From took place at Goethe-Institut Morocco. END_OF_DOCUMENT_TOKEN_TO_BE_REPLACED

Les Intégrations exemplified a specific conceptual motif, one that acted not within a single field but rather implied a relationship of interdependence between different media (visual arts and architecture) and techniques (those of graphic arts and architecture). They thus allowed for the emergence of disciplines that were not static in formation but evolving in relation to one another. The intermedial relationship they created between art and architecture raises the question of what lies “between” these disciplines: how do they communicate with each other? What are the elements of language common to this “spirit of the times,” to the particular atmosphere of the late 1960s? END_OF_DOCUMENT_TOKEN_TO_BE_REPLACED

Mohamed Chabâa’s consciousness of his national heritage and his interest in architecture both emerged at a young age. His concept of the “3 A’s”—art, architecture and the arts and crafts—grew out of his discovery both of the Italian Renaissance and the Bauhaus School during a period of study in Rome in the early 1960s. From then on, bringing together the “3 A’s” would become a central interest, a concept Chabâa would apply in various ways and fiercely defend throughout his long and varied career. END_OF_DOCUMENT_TOKEN_TO_BE_REPLACED 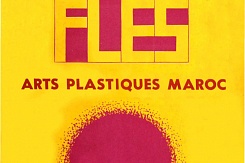 The need for a synthesis of the arts and, with this, a change of pedagogical principles, was not only present at the beginning of the twentieth century (forces that prompted the Bauhaus’s foundation), but after WWII as well, during the “Short Century” of decolonization. This second modern movement and its relation to modernism and the vernacular, the hand made, and the everyday was vividly expressed through texts and art works published in the Moroccan quarterly magazine Souffles, published beginning in the mid-1960s by a group of writers and artists in Rabat, Casablanca and Paris. END_OF_DOCUMENT_TOKEN_TO_BE_REPLACED

I was sixteen years old when I undertook my first journey into finding a professional vocation, first in Asilah, then in Fez followed by Tétouan. 1952. Tangiers was, to me, an open book, a window on the world. The freedom of seeing, of discovering and of feeling, of weaving the narratives of my dreams. END_OF_DOCUMENT_TOKEN_TO_BE_REPLACED

In the years when Western nations were committed in new projects of partnership, with what was then called the “Third World”, young artists and students from the Maghreb had grown up in the passionate climate of the struggle for independence, were talented, open to modernity, and eager to connect with twentieth-century international art movements, which were different in production and spirit from colonial ideology and culture. END_OF_DOCUMENT_TOKEN_TO_BE_REPLACED