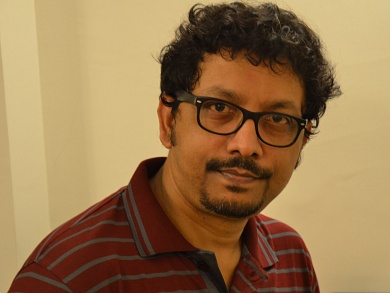 Anshuman Dasgupta is an art historian and curator teaching in Visva-Bharati University, Santiniketan since 1997. He studied Art History in Santiniketan and M.S University, Baroda Goldsmiths College, London and Film Appreciation in F.T.I.I. Pune.

Dasgupta is currently one of the official researchers for bauhaus imaginista: Corresponding With and also elected the chief curator for Kala Bhavan in its 100 years (which was founded by Rabindranath Tagore in the year 1919, the same year as Bauhaus).

Dasgupta's collaborative sound project (work of art) ‘Short Wave’s Transit Tales’ is commissioned by Documenta (the German international exhibition project, under its Radio project and was transmitted in 8 countries of 4 continents). This piece has been recently selected as one of the 80 works from the world to be shown in three exhibitions in Basel, Switzerland and Berlin and Weimar, Germany.