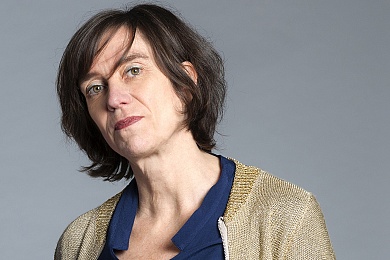 Wendelien van Oldenborgh, born 1962 in Rotterdam, develops works in which the cinematic format is used as a methodology for production and as the basic language for various forms of presentation. She often uses the format of a public film shoot, collaborating with participants in different scenarios to co-produce a script and align the work to its final outcome. With these works, which look at the structures that form and impede us, she has participated in large biennials and in smaller dedicated shows.

Recent presentations include a solo show entitled Cinema Olanda at the Dutch Pavilion in the 57th Venice Biennial 2017; As for the future (2017); a solo show at the DAAD gallery, Berlin; Prologue: Squat/Anti-Squat (2016) at The Jerusalem Show of the Palestine Biennial East Jerusalem; and From Left to Night (2015), a solo show at The Showroom London. She has also exhibited at the RAW Material Company Dakar (SN), Tate Liverpool (UK), as well as at the 2nd Biennial of Kochi-Muziris in 2014, the Danish Pavilion at the Venice Biennial in 2011, and at the 11th Istanbul Biennial in 2009. Van Oldenborgh is a member of the (Dutch) Society for Arts and a recipient of the Dr. A.H. Heineken Prize for Art (2014). A monographic publication, Amateur, was published by Sternberg in 2016.

For the Moscow exhibition Moving Away: The Internationalist Architect, Wendelien will present her research that forms part of an artistic commission on the life and work of the Bauhaus architect Lotte Stam-Beese and her legacy in the modern-day Netherlands.