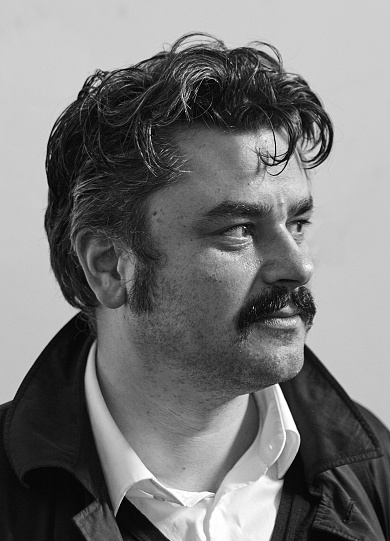 Matthias Görlich is a communication designer, teacher, and researcher. In 2000, he set up his design studio as a platform for critical research, education, and design development. He worked on numerous international projects and consultancies including commissions by the United Nations, Haus der Kulturen der Welt Berlin, Städelmuseum, Schirn-Kunsthalle and Weltkulturen Museum, Frankurt, Architectural Forum Zurich among others. He has designed various exhibitions and publications such as a 13 books series titled "Wohnungsfrage" (Housing Question) accompaniying an exhibition at Haus der Kulturen der Welt Berlin aswell as exhibition designs and publications for "Ape Culture", "Ein Bericht", "The Whole Earth" at the same institution. From 2016 he developed the graphical concept for a travelling exhibition and publication series titled "Weltstadt" initiated by Goethe Institute. He is also in charge of the design for a book series on architecture and cultural theory, edited by architecture theorist Stephan Trüby (University Munich) titled "Schriftenreihe zu Architektur und Kulturtheorie". Currently Matthias is developing several publications on architecture such as "Object of Zionism", a 1.000 pages book on the role of architecture in Israel (ed. by Zvi Efrat) aswell as "Top Down Bottom Up", the first monograph about  the practice of San Diego-based architects/theorists Teddy Cruz and Fonna Forman.

Matthias taught internationally eg. at ENSAD, Paris, ELISAVA, Barcelona, ZHDK, Zurich, KRVIA, Mumbai, Städelschule, Frankfurt among others and he is currently full professor for Informationdesign and University for the Arts Halle (Saale). Together with Ruedi Baur, Miguesl Robles-Duran and Jesko Fezer, he directed a postgraduate program on the development of design strategies for a new Civic City based at the University for the Arts, Zurich. He is co-editor of the „Civic City Cahiers“ (together with Jesko Fezer) and the „Studienhefte Problemorientiertes Design (with Jesko Fezer and Oliver Gemballa). Recently he co-published the book „Vergessene Schulen“ on the politization of architectural education in the late 60s (together with Philipp Misselwitz and Nina Gribat).