Partha Mitter is Emeritus Professor in art history. As writer and historian of art and culture, he specializes in the reception of Indian art in the West and in global modernism. END_OF_DOCUMENT_TOKEN_TO_BE_REPLACED

Gropius wrote his Bauhaus manifesto shortly after the end of World War I. The German empire had collapsed, Russia had undergone a revolution and a second revolution in Germany was in the process of being suppressed. Throughout Germany people felt the necessity for a social and intellectual change. END_OF_DOCUMENT_TOKEN_TO_BE_REPLACED 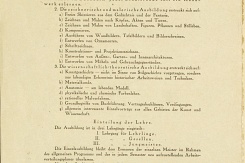 Even though the progressive artists of the interwar period ultimately failed in their plan to realize the new, egalitarian society they had envisioned, their influence was lasting. The international avant-garde produced some of the most important artists of the twentieth century. Meanwhile, some members of the Arbeitsrat für Kunst (Workers council for art) occupied important positions at the Bauhaus—above all, its founding director Walter Gropius. END_OF_DOCUMENT_TOKEN_TO_BE_REPLACED 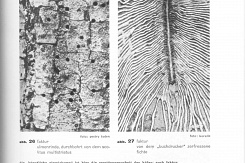 In the epistemic context of a fundamental skepticism towards the existing knowledge system, the Bauhaus school was in pursuit of “unlearning”: dismissing conventional learning and promoting pre- linguistic, intuitive approaches- which also led to adoptions of non-academic modes of perception and included an interest in pre-modern knowledge systems. END_OF_DOCUMENT_TOKEN_TO_BE_REPLACED

Lena Bergner developed carpet patterns applying specific methods learned from Paul Klee discernible in her finished work. The results, however, are quite unique. This is precisely what Klee sought to achieve with his classes at the Bauhaus: to point to paths of design so that the formal language is not arbitrary, without, however, prescribing predetermined outcomes. END_OF_DOCUMENT_TOKEN_TO_BE_REPLACED

Although the Bauhaus opened its door in 1919, it took more than three years for Gropius to fully organize the school’s faculty, since with the departure of several of the old art school’s professors, such as Max Thedy, Richard Engelmann and Walther Klemm, open positions had to be regularly filled. But Gropius’s first appointments indicated the course set toward an international avant-garde school, a school of invention. END_OF_DOCUMENT_TOKEN_TO_BE_REPLACED

In this essay Linn Burchert sheds some light on the darkness obscuring Grunow’s practice by presenting the background and details of Grunow’s teaching, concluding by examining the striking parallels between her harmonization teaching and meditative and yogic practices, which had already been introduced at the Bauhaus in Johannes Itten’s preliminary course. END_OF_DOCUMENT_TOKEN_TO_BE_REPLACED

It was the special qualities of the Swiss artist Johannes Itten, whose career as a primary and secondary school teacher was characterized by adherence to the principles of reform pedagogy, to have introduced a stabilizing structural element into the still unstable early years of the Bauhaus: the preliminary course which—in addition to the dual concept of teaching artistic and manual skills and thinking—was to remain a core part of Bauhaus pedagogy, despite considerable historical changes and some critical objections, until the closure of the school in 1933. END_OF_DOCUMENT_TOKEN_TO_BE_REPLACED

My artistic practice working primarily with abstract folded paper objects led me to Josef Albers and his similar obsession with paper as an instructional medium. Initially looking for pleated paper forms and to learn more about the history of these techniques, I have since been swept up in the maelstrom of Albers' pedagogical mindset. It’s difficult to look at one area of his thinking and not get pulled into many other directions, finding yourself challenged at every turn. END_OF_DOCUMENT_TOKEN_TO_BE_REPLACED

Mazdaznan had a significant although often misunderstood impact on the life and work of Johannes Itten, a key figure in the development of the Weimar Bauhaus. A devout practitioner of Mazdaznan, he was responsible for introducing it to students of the Bauhaus in the early 1920s. This essay explores the intimate relationship between Itten, Mazdaznan and the Bauhaus and, in so doing, also underscores how in its infancy the Bauhaus was very different from its later incarnation as a school associated primarily with technical innovation. END_OF_DOCUMENT_TOKEN_TO_BE_REPLACED

Having experimented with Mazdaznan’s teachings on nutrition, breathing and character while studying at the Stuttgart Academy of Art (1913–16), Johannes Itten used these findings for the first time as a “teaching and educational system” while directing his Viennese painting school (1916–19). By 1918/19 at the latest (still before his move to the Bauhaus), Itten had also learned about Mazdaznan’s racial model. But how did the racialist worldview of the Swiss Bauhaus “master” affect Bauhaus practice? END_OF_DOCUMENT_TOKEN_TO_BE_REPLACED

In the late nineteenth century the self-styled Dr. Otoman Zar-Adusht Ha'nish founded Mazdaznan, a quasi-religious movement of vegetarian diet and body consciousness, which flourished across the USA and Europe until the 1940's. The Egyptian Postures is a guide to the most advanced Mazdaznan exercises that Johannes Itten taught his students at the Bauhaus. This edition of Dr. Otoman Zar-Adusht Ha'nish’s original instructions has been newly edited and illustrated by Ian Whittlesea with images of actor Ery Nzaramba demonstrating the postures. END_OF_DOCUMENT_TOKEN_TO_BE_REPLACED

On 4 May 1968 the exhibition 50 Years of the Bauhaus was opened at the Württembergischer Kunstverein in Stuttgart. Designed by Herbert Bayer and conceived amongst others by Hans Maria Wingler and Ludwig Grote, the exhibition was shown in eight museums worldwide until 1971. To this day, it is considered one of the most influential post-war exhibitions on the Bauhaus and was of great significance in the course of the nation building process for the still-young Federal Republic. Fifty years later the Württembergischer Kunstverein undertook a critical rereading of the historical exhibition, which created a long-term image and brand of Bauhaus that has been and still needs to be called in question: not least in such a year of jubilation. END_OF_DOCUMENT_TOKEN_TO_BE_REPLACED

“My method of bringing new life to archival images is to look at what happens at the margins rather than the center of a picture. I am also obsessed with making links, based on the belief that everything is connected. And also with what I call ‘narrative environments,’ mediating spaces facilitating new forms of engagement.” Luca Frei is a commissioned artist for bauhaus imaginista: Corresponding With. He talks about his approach to his installation for the exhibition at MoMAK in Kyoto. END_OF_DOCUMENT_TOKEN_TO_BE_REPLACED

Kawakita called the educational activities that developed around the central axis of the School of New Architecture and Design “kōsei education.” The term “compositional/structural education” is often taken nowadays to refer to a preparatory course in composition derived from the Bauhaus—plastic arts training in which plastic elements such as color, form and materials are treated abstractly.  END_OF_DOCUMENT_TOKEN_TO_BE_REPLACED

The impact of the Bauhaus teaching methods reached far beyond Germany. Conversely, throughout its existence, a Japanese sensibility permeated the Bauhaus, springing from the Japonisme of individual professors, until its closure in 1933. This article analyzes the reciprocal impact of German and Japanese design education in the interbellum period in order to shed new light on the tightly knit network of associations then connecting Japan and Europe. END_OF_DOCUMENT_TOKEN_TO_BE_REPLACED

It’s widely known that Johannes Itten had an interest in Asian philosophy and art. He had a series of fruitful encounters with Japanese artists while leading his Itten-Schule art institute in Berlin (1926–34). In this article Yoshimasa Kaneko presents his research of these exchanges: In 1931 Nanga painter Shounan Mizukoshi taught Japanese ink painting in Nanga style at the Itten-Schule; in 1932 Jiyu Gakuen students Mitsuko Yamamuro and Kazuko Imai (Married name: Sasagawa) studied there; and finally, in 1933 the painter and poet Yumeji Takehisa also taught Japanese ink painting (including Nanga style) at Itten’s invitation. END_OF_DOCUMENT_TOKEN_TO_BE_REPLACED 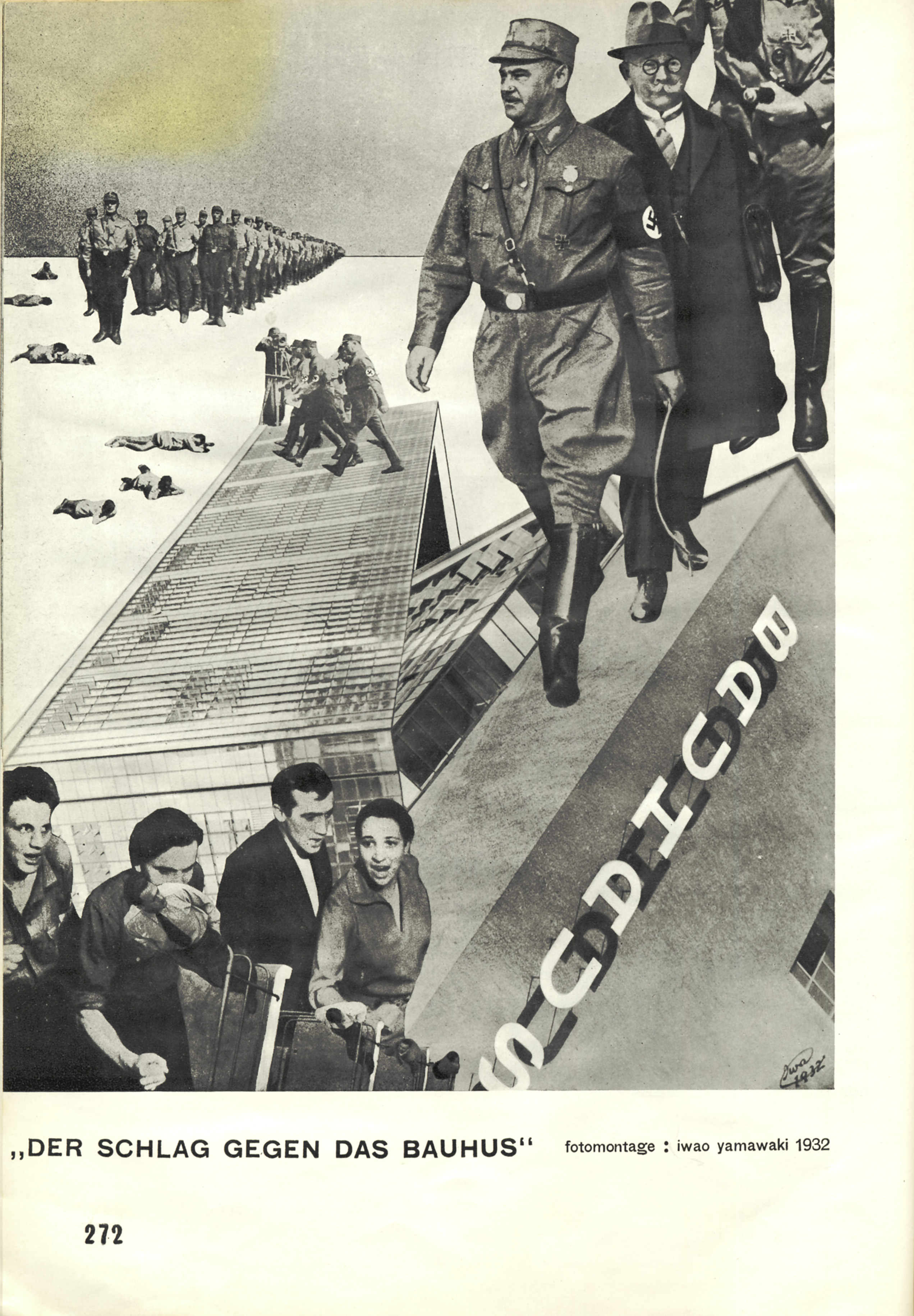 For the Yamawaki couple, their studies at the Dessau Bauhaus ended with the closure of the Dessau site. Iwao’s luggage for his return home also included his collage Der Schlag gegen das Bauhaus. It was first published in the architecture magazine Kokusai kenchiku in December 1932. Iwao let the collage speak for itself, publishing it without comment. END_OF_DOCUMENT_TOKEN_TO_BE_REPLACED

The Otolith Group have been commissioned to produce The O Horizon for bauhaus imaginista, a new film containing studies of Kala Bhavana as well as the wider environments of Santiniketan and Sriniketan. Through rare footage of art, craft, music and dance, it explores the material production of the school and its community as well as the metaphysical inclinations that guided Tagore’s approach to institution building. END_OF_DOCUMENT_TOKEN_TO_BE_REPLACED

The Bauhaus is renowned for its contribution to modernist architecture and design. Less known but equally significant is its pioneering role in opening up a transcultural network that created the conditions for global conversations on art and design as early as the 1920s. END_OF_DOCUMENT_TOKEN_TO_BE_REPLACED

The question of how one resists populist nationalism is both obvious and fiendishly difficult. This sounds like a paradoxical proposition, and, indeed, it is. I am inspired by an early critique of nationalism which bears an uncanny resonance in today’s world: a critique that was made in 1916 by the Bengal poet and visionary, Rabindranath Tagore, during a lecture tour in Japan, in the midst of the First World War. END_OF_DOCUMENT_TOKEN_TO_BE_REPLACED

In this article Natasha Ginwala examines how certain Bauhaus ideas flowed into Tagore’s pedagogic experiment and rural reconstruction program at Sriniketan (created in 1921–22), as well as the engagement with design Dashrath Patel, the founding secretary of the National Institute of Design (NID) and its leading pedagogue, pursued in the rural sphere. END_OF_DOCUMENT_TOKEN_TO_BE_REPLACED

This essay was occasioned by the Delhi exhibition of the Hangzhou chapter of bauhaus imaginista and the accompanying seminar in December 2018. The overarching brief of the seminar was to discuss the pedagogic aspects of schools in various parts of the world that are relatable to the practices of Bauhaus. Specifically, the essay attempts to capture the foundational moments of Kala Bhavana, the art school in Santiniketan that, incidentally, also steps into its centenary year in 2019. END_OF_DOCUMENT_TOKEN_TO_BE_REPLACED

ln December 1922, ‘The Fourteenth Annual Exhibition of the lndian Society of Oriental Art’ was held at Samavaya Bhavan, number seventeen Park Street. Paintings by artists from the ‘Bengal school’—all of them members of the lndian Society of Oriental Arts—were exhibited. Most of these artists painted in a manner, which would have been recognisable as that school’s invention, a particularly lndian signature style, with mythology as preferred subject. Hung on the other side of the hall was a large selection of works from the Bauhaus.  END_OF_DOCUMENT_TOKEN_TO_BE_REPLACED

Ritwik Ghatak’s film Ramkinker Baij: A Personality Study on the sculptor from Santiniketan is like a spurt, a sudden expression of ebullient enthusiasm from a friend, who is said to have shared artistic affinities with him. Incidentally, it also registers, through a conversational method, the process of discovering the artist, who was embedded, organic, yet global and most advanced for his time. END_OF_DOCUMENT_TOKEN_TO_BE_REPLACED

The works from Anna Boghiguian shown here are from an installation commissioned by the Institute of International Visual Arts (Iniva) titled A Play to Play as part of the exhibition Tagore’s Universal Allegories in 2013. These works incorporate elements associated with Tagore, from the artist’s frequent visits to Santiniketan. END_OF_DOCUMENT_TOKEN_TO_BE_REPLACED