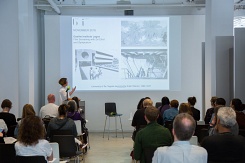 This symposium, part of bauhaus imaginista, asked what it means to take cultural materials and inscribe them within a new context, whether this is done by the 19th-century ethnographic museum, the avant-garde artist, the mid-century teaching collection or in contemporary art. END_OF_DOCUMENT_TOKEN_TO_BE_REPLACED 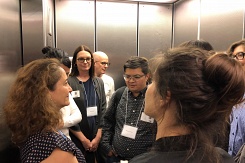 The symposium Learning From in New York explored what it means to take cultural artifacts and inscribe them within a new context, whether by nineteenth century ethnographic museums, avant-garde artist, in teaching collections, or contemporary art projects. Prior to the symposium, a group of artists, designers, curators and art historians toured museums archives and studios around New York, examining and discussing a variety of materials, ranging from Mesoamerican artefacts to the work of the mid-century artists who found inspiration in these collections. END_OF_DOCUMENT_TOKEN_TO_BE_REPLACED 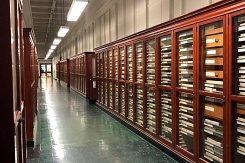 One primary question leading up to the bauhaus imaginista workshop and symposium had concerned the extent to which Bauhaus artists had been culturally informed by and subsequently appropriated Indigenous art. This essay examines ethnographic and natural history museology and how Indigenous cultures are perceived, translated and exhibited through Westernized perspectives that are informed by a philosophical subject-object divide. END_OF_DOCUMENT_TOKEN_TO_BE_REPLACED 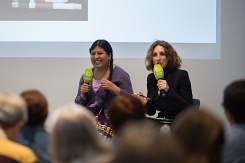 This is the transcript of a conversation between art historian Erin Freedman and the trans artist and scholar Sebastian De Line that took place during the bauhaus imaginista: Learning From symposium at the Goethe-Institut in New York in June 2018. END_OF_DOCUMENT_TOKEN_TO_BE_REPLACED 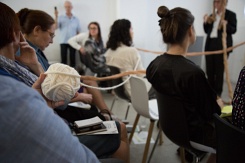 The search for the spiritual characterized Lenore Tawney’s long life, and was reflected in both the iconography and materials she used in her work. She was a regular diarist and her journals provide valuable insight into this deeply personal search. bauhaus imaginista researcher Erin Freedman interviews Executive Director of the Lenore G. Tawney Foundation, Kathleen Nugent Mangan, about Tawney’s approach and work. END_OF_DOCUMENT_TOKEN_TO_BE_REPLACED 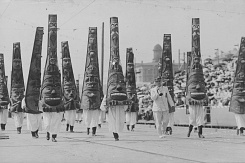 No matter how distanced we are from our collective origins in systems of mutual reciprocity and exchange, these activities remain “full of rituals and rights.” It was precisely this conception of systems of exchange as intrinsically connected to magical power, ritual, and ceremony that four prominent Seattle businessmen seized upon when they invented the Golden Potlatch, a city-wide festival that rather artfully combined the just-passed prosperity of the Klondike Gold Rush with the mutual reciprocity that is the basis of “potlatch” ceremonies customary in certain Native North American societies, particularly in the northwest of the American continent.   END_OF_DOCUMENT_TOKEN_TO_BE_REPLACED 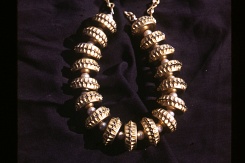 Not by nature acquisitive and certainly not art collectors, Josef and Anni Albers began in 1936 to collect Mexican figurines and other artifacts unearthed from that land’s memory. They described the country, which they first visited in 1935, as “the promised land of abstract art.” Returning to Black Mountain College Anni Albers and Alexander Reed began experimenting with everyday articles to create a strange and beautiful collection of objects of personal adornment inspired by their visit to Mexico. END_OF_DOCUMENT_TOKEN_TO_BE_REPLACED 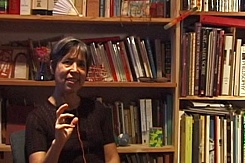 In this recorded interview, Vicuña describes how after she first learned about quipu, she immediately integrated the system into her life. Quipu, the Spanish transliteration of the word for “knot” in Cusco Quechua, is a system of colored, spun and plied or waxed threads or strings made from cotton or camelid fiber. They were used by the Inca people for a variety of administrative purposes, mainly record-keeping, and also for other ends that have now been lost to history.  END_OF_DOCUMENT_TOKEN_TO_BE_REPLACED

Ancient and Indigenous textile cultures of the Americas played a critical role in the development of the work of fiber artists who came of age in the U.S. in the late 1950s and 1960s. Anyone who has studied fiber art of this period, myself included, knows this well. They openly professed an admiration for traditions ranging from Navaho weaving, to the use of the backstrap loom in Mexico and Central America, to the ancient weaving techniques of Peru. END_OF_DOCUMENT_TOKEN_TO_BE_REPLACED 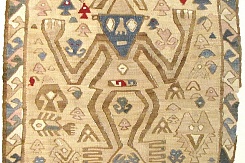 At the time Anni Albers wrote On Weaving in 1965, few discussions of Andean textiles “as art” had appeared in weaving textbooks, but there were numerous publications, many of which were German books published between 1880 and 1929, that documented and described their visual and technical properties. Albers almost single-handedly introduced weaving students to this ancient textile art through her writing and her artistic work.  END_OF_DOCUMENT_TOKEN_TO_BE_REPLACED